Seasons of Betrayal – The Heartache of Loving a Hated Band

I was finally 21, enabling me to enter the confines of Chicago’s Lounge Ax (complete with original dank) for what proved to be Die Kreuzen’s final performance in my fair city.  Only, I didn’t know it was all about to end.  I bought my Cement t-shirt, and watched the band members mill about with drinks (having played Lounge Ax as a minor, I knew there was no proper “backstage”)  A couple older friends of mine, feeling it their duty to conduct the  meet-and-greet as is custom with older folk, cornered Keith Brammer and waved me over to say hello.  I didn’t budge.  Later, I found myself in the club’s basement standing at the urinal with Brian Egeness.  I stared straight ahead.  These guys were my heroes, right?  What was I going to do, ask about the Packers?  Whispers went through the crowd that Billy Corgan was in attendance.  Having built up a fairly proprietary relationship with this band, I felt he was intruding on a small phenomenon I had discovered emerging from a fog years ago on the Metro stage.  Well, me and the other 12 people in attendance.  Yeah, Die Kreuzen has an effect on people.  And then they don’t return.

It’s hard not to come over a bit sardonic, as I know that playing in a band can be at once the most rewarding of experiences and the most self-deprecating.  Most people don’t understand bands.  I’m sure there are more bands now than ever which have been formed as “business ventures”, complete with street teams and an onslaught of merchandise and downloads ready to fly.  Die Kreuzen, I imagine, were a group of friends.  As with most collectives, there are shared passions, but the fissures propagate as tastes change and evolve, or you compromise.  It’s not always strictly democratic, but when it really works we can almost call it alchemy.  If one can accept that the group Die Kreuzen likely took in influences ranging from Coltrane to Bad Brains, then it stands to reason that they were never a band that could revert to type, simply because they never had set roots to begin with.  The restless spirit of, say, David Bowie or John Lennon to constantly violate expectation, to innovate, to place personal and artistic considerations before commercial; this is what creates great bands and pushes music forward despite an incongruence with everything that is acceptable, marketable, and demanded by the fans.  Die Kreuzen was really good at this.  In fact, they were pathologically proficient at the volte face.

And therein lays the betrayal – Die Kreuzen sold out.  Big Time.  Naked self-interest and nothing but.  See for yourself – take a look at Youtube.  Read the rants that go on for pages about whether Die Kreuzen should be made to apologize for not signing to Profile, denying us the opportunity to harp on their lack of indie cred.  When you’re done digesting what is basically a dog’s dinner of pointless malevolence, check out the series of live clips from Back Porch Videos, where the 1985 Die Kreuzen are playing a club in Detroit to a group of rather listless leather-clad Mohawk boys looking for something to fight.

For the uninitiated, it is important that you understand the context, because with Die Kreuzen the chronology is what makes it impossible to simply sit on a fence.  This band put out one of the greatest punk/hardcore albums ever.  We’re talking about an album of such ferocity and originality that it is barely fathomable that it could be even reproduced today by any of your best-trained Pro-Tools equipped Screamo bands with a cache of pilfered credit cards from Daddy.  The milling malcontents in Murder City were waiting for that band, but the transition was already taking place.  Die Kreuzen play “There’s a Place”, but it’s much too fast despite the fact it is introduced as “scary and slow”.  “Cool Breeze” doesn’t seem to have lyrics, and it is largely ineffective as it is not meant for electric guitar, much less a punk club.

It is here, in Detroit, as you sit at your computer with 25 years of hindsight, that we can witness a band coming to terms with what is on offer were they to simply carbon-copy their debut and spit out Die Kreuzen II.  If you’re squirming in your chair as you watch these performances, imagine how the band felt.  I’m a big fan of analogies, so I’ll throw one at you – Let’s say those kings of mope-rock, Korn, were fucking about in rehearsal and stumbled upon a catchy little riff.  The drummer joins in.  The chubby singer begins to croon half-jokingly about his new girlfriend.  Suddenly, they’re all smiling at each other because it’s good.  It’s not quite “Korn”; in fact it’s stunningly beautiful.  It makes “Nothing Compares To U” sound like Gorgoroth.  It may be a monster hit song, were it not for the fact that Korn doesn’t play pop.  In the world of Die Kreuzen, if the song came from Dan, Keith, Brian, and Erik, then it is valid.  Sure, you could sweep it away for fear that the faithful will find you “soft”, but then who is being true to their muse and who is the sell out?

Die Kreuzen fucked with the formula.  Brazenly.  I can remember buying October File at Pravda Records in Chicago, running my fingers over the raised lettering and trying to work out just what lay within that enigmatic cover shot of….what the hell is that?  Even the song titles revealed little.  It opens with a “Cool Breeze”?  “Among the Ruins” sounds pretty tough.  “Uncontrolled Passion”?  My friends had seen Die Kreuzen with Corrosion of Conformity a few months before and had been raving ever since about this incredible punk band with decidedly unpunk 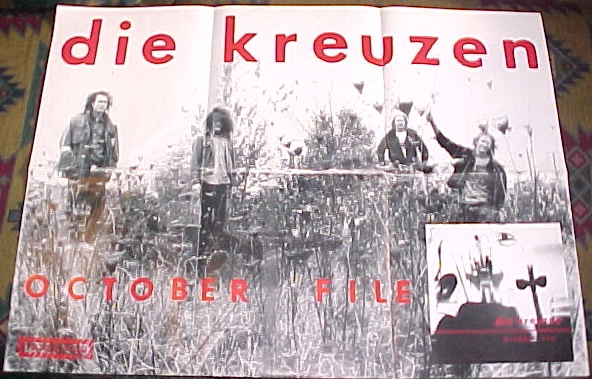 hair.  The poster inside (these guys have posters?) confirms that they are indeed a hairy bunch.  And then I put on the opening track – Jesus.  I later found a local zine that actually started an October File review with the quote “Judas H. Priest!”  This album presented a challenge.  My friends singled out “Imagine a Light” as a favorite, seeing as that it was a fast one.  But I was picking up on something else.  Granted, the singer still sounded like he was vying for Linda Blair’s part in The Exorcist, but now that unmistakable howl was accompanied by something more dramatic, something that suggested grandeur, even….beauty?  I couldn’t even quantify what these guys had done.  It’s like The Beatles following up Meet the Beatles with Revolver.  Nah.  Led Zeppelin II followed by Houses of the Holy?  Not quite.  Perhaps Bad Brains following up Rock for Light with There’s a Riot Goin’ On.  This was an odd bird.  And it seemed to belong to me.

I can still recall seeing the ads for an album called Century Days that never seemed to arrive.  They were already playing the album live on my numerous trips to The Metro, where their hair only seemed to get longer as they carved out their niche as the band that played punk shows with a fog machine, sometimes wearing dress clothes and paisley.  They always headlined, yet they never seemed to draw that many people.  They were never less than wholly engaging, and seemed oblivious to the incessant cries for “All White!”  When my friend Scott arrived home one day from Rolling Stone Records with that fabulous Century Days gatefold in hand, my initial disappointment at once again being denied a lyric sheet and what I perceived to be an overall pretension creeping in (they’ve become a volcano!) was assuaged by the rather bemused look on Dan Kubinski’s face on the inner photo.  After hearing songs that displayed an even greater command of dynamics, melodicism, and even hooks, I was convinced that this would become possibly the greatest band of the 80s, a secret that could barely be contained.  I could scarcely believe the same band that performed on Cows & Beer was the band that released that first full-length LP on Touch & Go.  The transition to October File was even more radical.  Century Days had to be the pinnacle.  I was about to lose my favorite band.

Then came the backlash.  As if it hadn’t already been bad enough with some of the “softer” tunes on October File, now it was clear that Die Kreuzen was not interested in mosh pits and skater shorts.  Yes, I was openly ridiculed for liking them (Hell, I still am).  It should be noted that we had no internet back in these days.  We found out about shows through flyers and word-of-mouth.  Milwaukee seemed a universe away, and it’s doubtful their local papers mentioned anything outside of meat raffles, hydrant flushings, or Def Jef sightings.  Die Kreuzen played Chicago constantly.  Yet, nothing seemed to be happening.

It is instructive at this point to look at a band heavily influenced by Die Kreuzen, Canada’s Voivod.  Their careers almost run parallel, but Voivod did the nasty and signed to Mechanic, a subsidiary or MCA Records.  Their Nothingface spawned a semi-hit video for “Astronomy Domine” and expectations for a “breakthrough” were rather high but not unrealistic.  The big album, however, never came.  1991’s Angel Rat was streamlined, concise, and most of all smart.  The single, “Clouds in my House”, wouldn’t have sounded out of place on a Die Kreuzen record, ironically.  Released a scant six weeks after the Butch Vig-produced Nevermind, Angel Rat was viewed by their fans as a betrayal.  The bassist left, and the singer an album later, and suddenly the next big thing was opening for Carcass.  In lieu of this scenario, it shouldn’t surprise us that Die Kreuzen released the Butch Vig-produced Cement the week before Nevermind.

The good news was that Cement received some very good reviews, and lineage to rising stars like Soundgarden and Smashing Pumpkins was made explicit.  So what happened?  Here’s where Die Kreuzen essentially drifted out of my life.  Rather than meet the fate of Voivod, it seems they just stopped.  It’s ironic that I was so afraid to even meet them at that last Chicago show, as I was probably one of the few people who really had something to say to them.  At some point, news arrived that they were gone, and though I tracked down a Fuckface 7”, it seemed that there was little chance of another Die Kreuzen.

I still have my October File T-shirt (now going on 25 years old).  Touch & Go Fest came to Chicago, but with no mention of Die Kreuzen I took a pass.  I bought the Lean Into It tribute, which Marc Ruvalo from Johann’s Face Records had told me about at least 12 years ago.  I tried to get my band, Apocalypse Hoboken, to record “Hide & Seek”, but it would have been awful.  Being in a touring band throughout the 1990s, I learned the truth about touring, the fickleness of fans, and mostly about the diminishing returns.  I would imagine that while the zines were besmirching Die Kreuzen’s good name and crying “Sell out!” the members were probably tending bar, or painting houses, or maybe working at a record store.  Should they unwisely decide to reunite and need a drummer, I’ve been rehearsing their repertoire since I was 15, so I’m ready to go.  I figure four shows – one album per show.  Just don’t tell anyone which album you’re playing on which night.  That way you’re guaranteed a bunch of middle-aged leather-clad dusty punks crossing their collective fingers each night, hoping for “All White”.